Today I want to share something a little bit different; I want to give you a little tour around a brand new hotel in Amsterdam. It's kind of special because the hotel was built in an old tram depot. You'd think that such an industrial and cold type of building could never be a nice hotel but Hotel De Hallen is maybe one of the most homely feeling hotels I've ever visited. 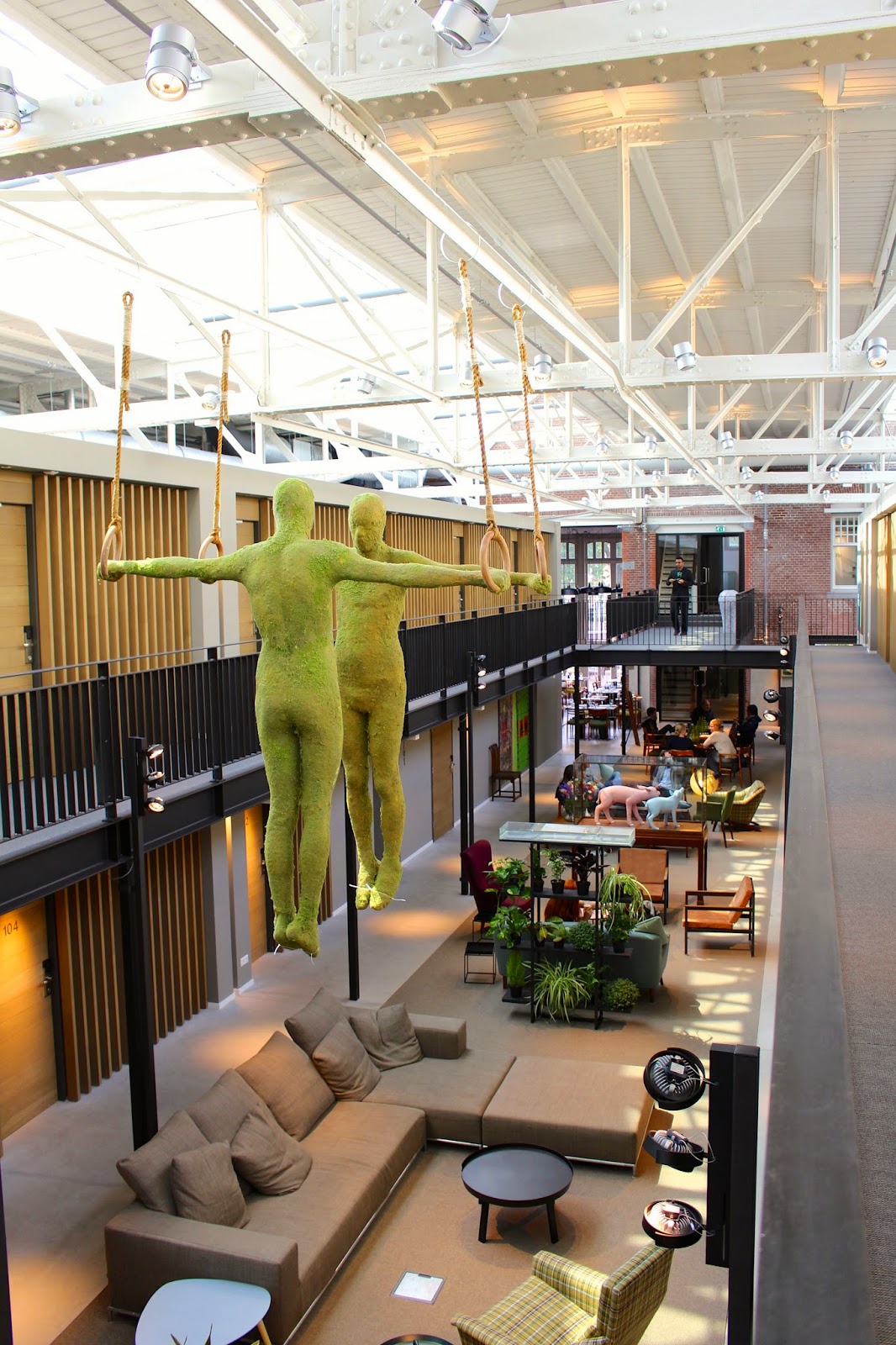 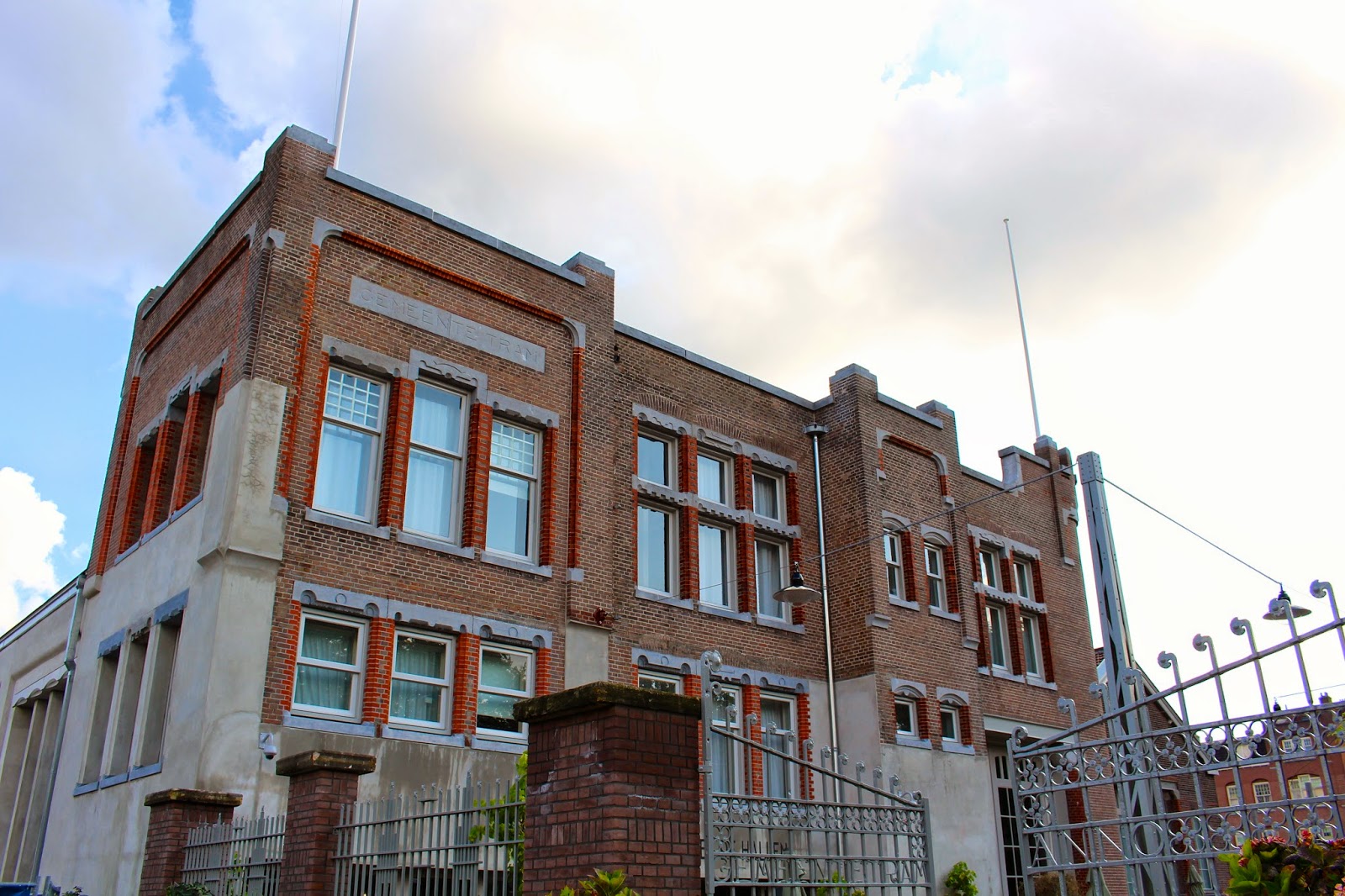 The area surrounding the hotel is kind of a building site, and part of the hotel complex (including food courts) will not open until later this year. But I think that once everything is completed, this little community will be incredibly nice for hotel guests as well as locals. 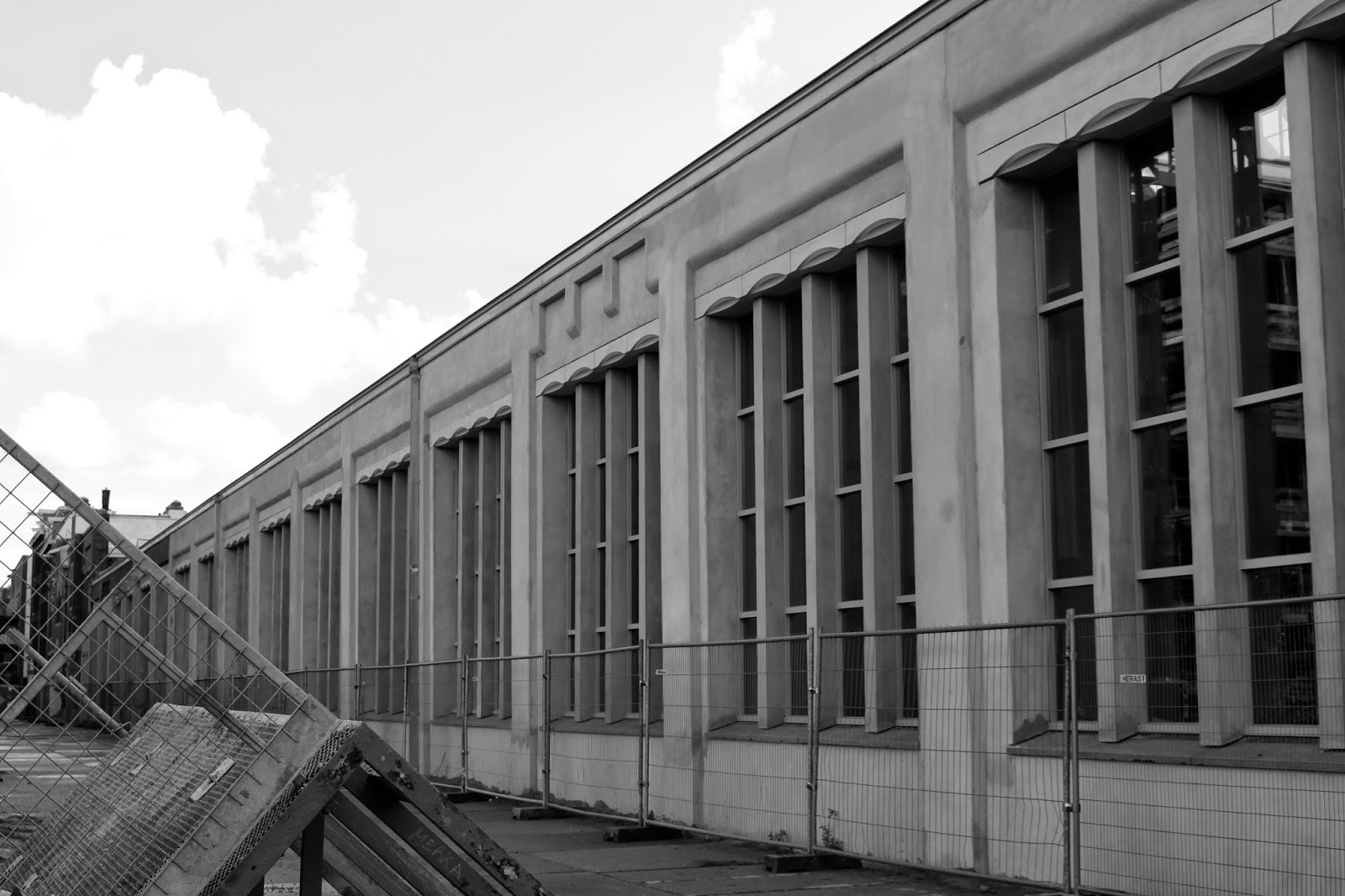 The reason why I get to show you all these nice pics is because the lady at the reception was kind enough to let me have a snoop around the hotel. Most nice hotels probably wouldn't let me do this, so I was quite surprised. I think this shows a bit what the service is like in the hotel; also I checked Tripadvisor reviews and the Office Manager of the hotel has replied to almost every single review, very accommodating and great PR in my opnion! 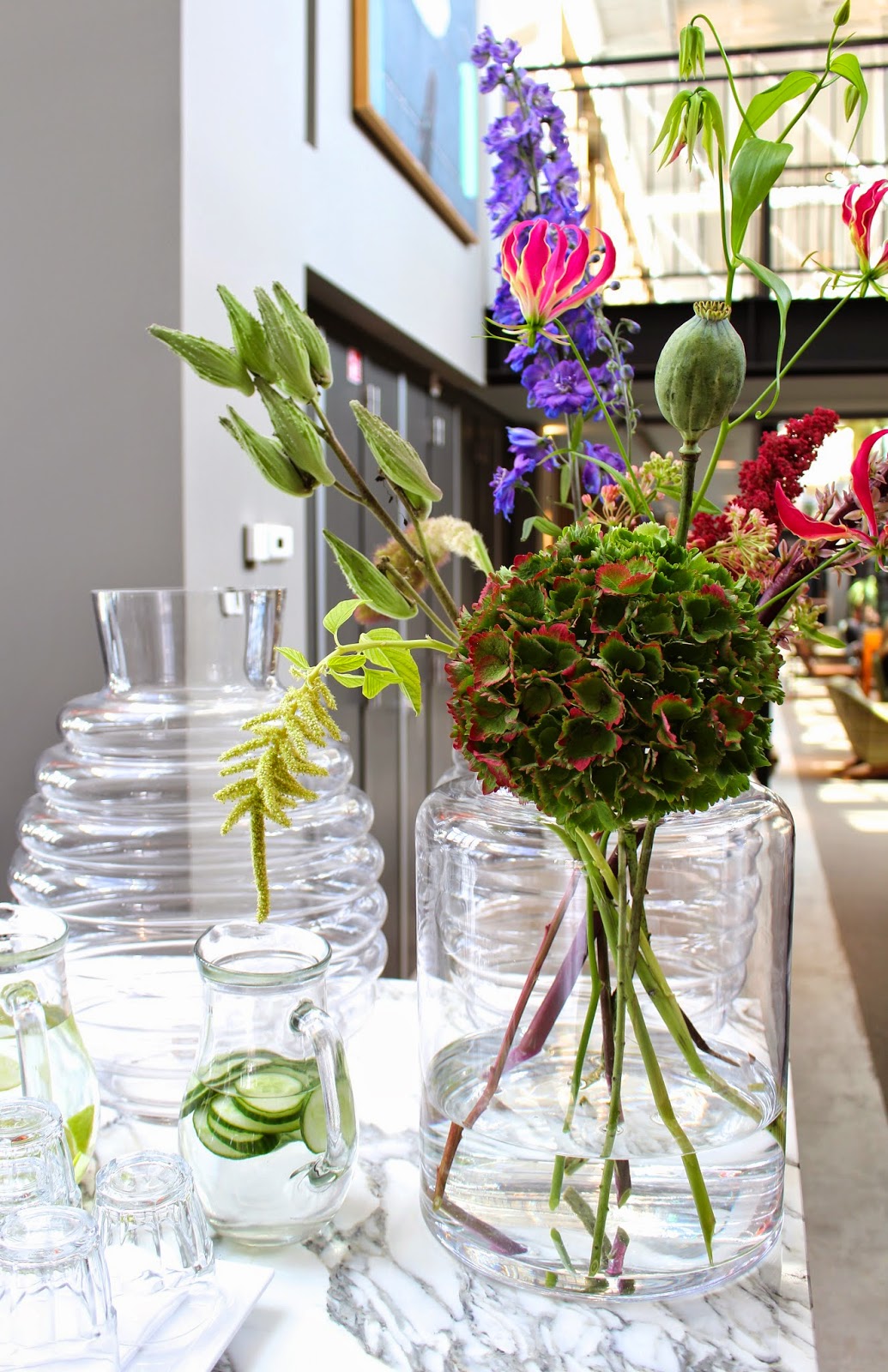 The lobby welcomes you wit cucumer- and lemon water, a beautiful bouquet and a bar + seating area on the left hand side. 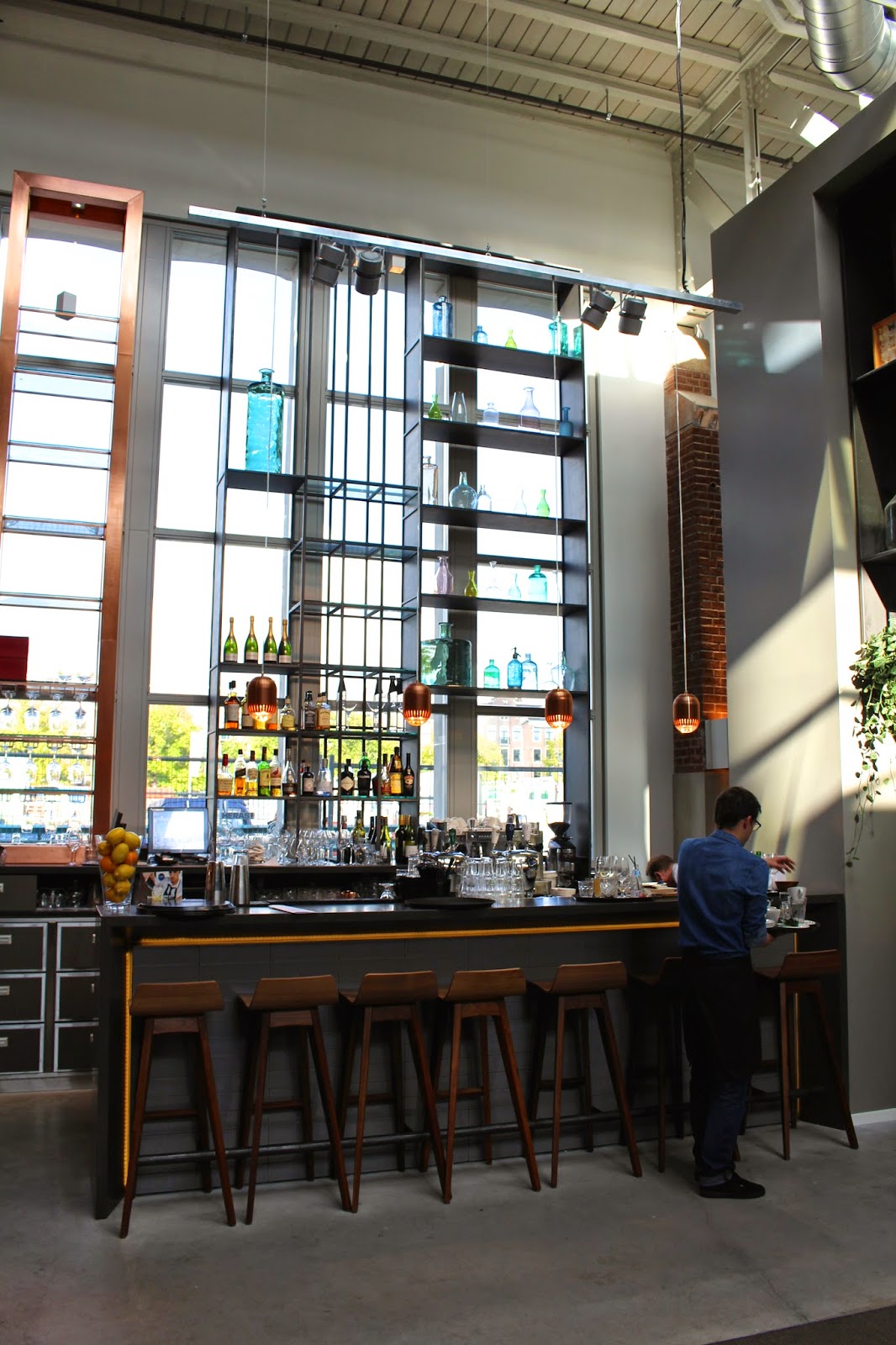 On your right-hand side, there is an open restaurant Remise47 where guests can have a bite and breakfast in the morning. 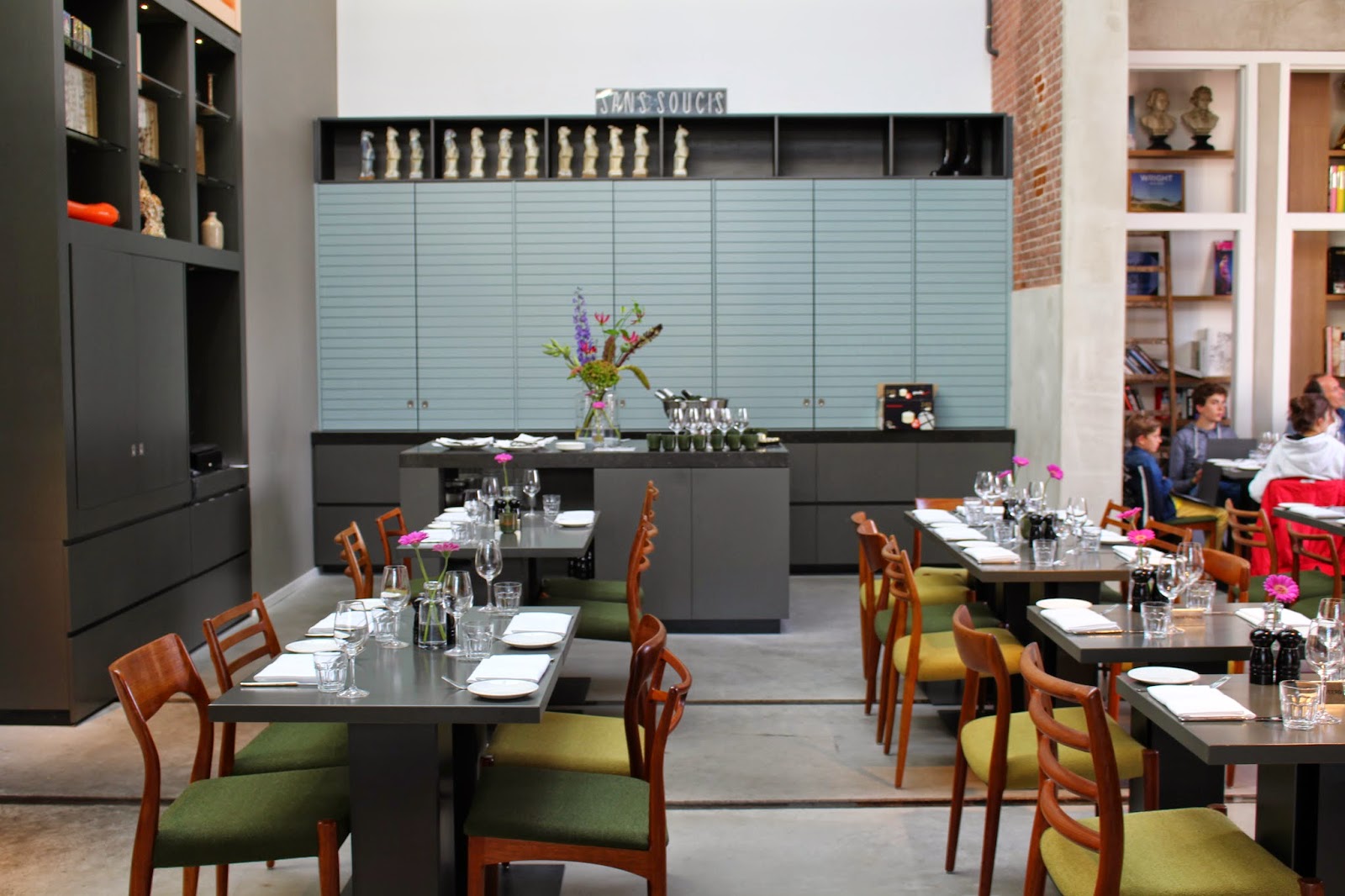 The whole building is flooded with natural light, coming from the large windows and greenhouse-like ceiling windows. It makes the whole hotel feel very airy and bright. 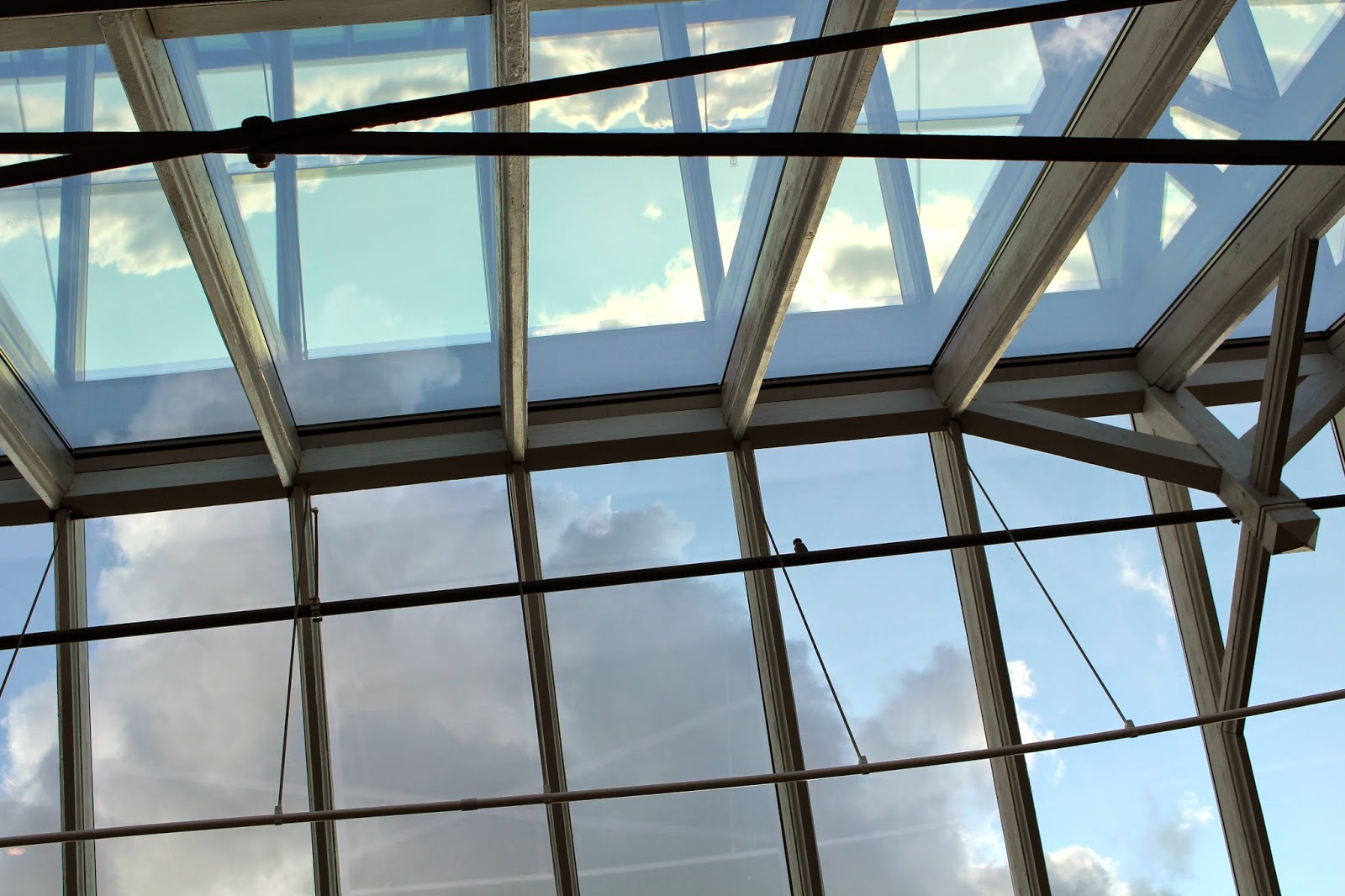 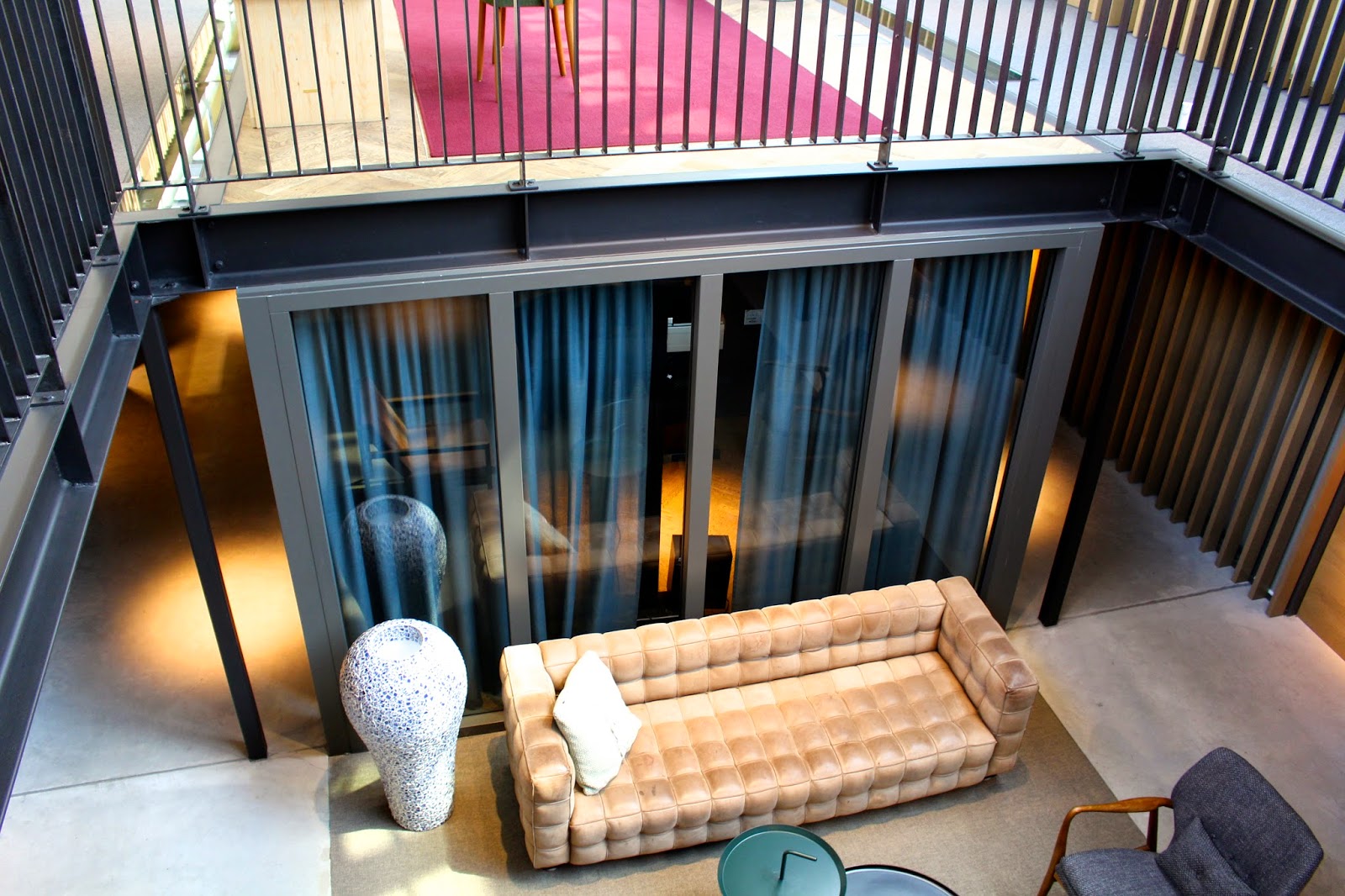 While Stigt Architects took care of the building's structure and architecture, the owner himself picked out all the art work in the hotel. While it's not my particular taste of art, the works make the hotel feel more like a home, and add a very original touch which other hotels often lack. 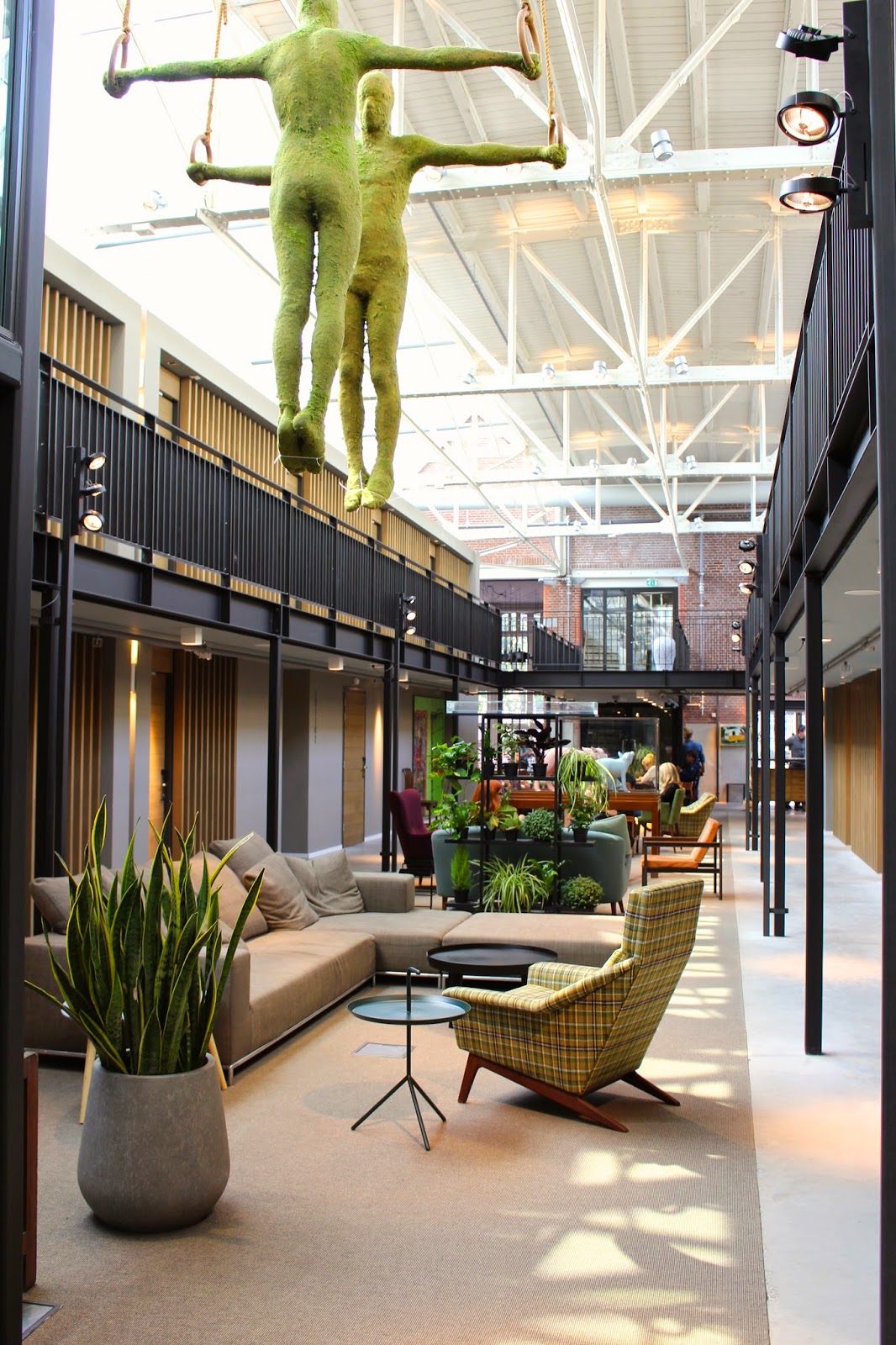 The hotel has 55 rooms, of which some overlook the main hall, which has lots of couches and little spaces where you can relax or work a bit. In the picture below you can see a little bit of the meeting room, which is actually really cool and not boring (that's what I think when I heard the words "meeting room"). 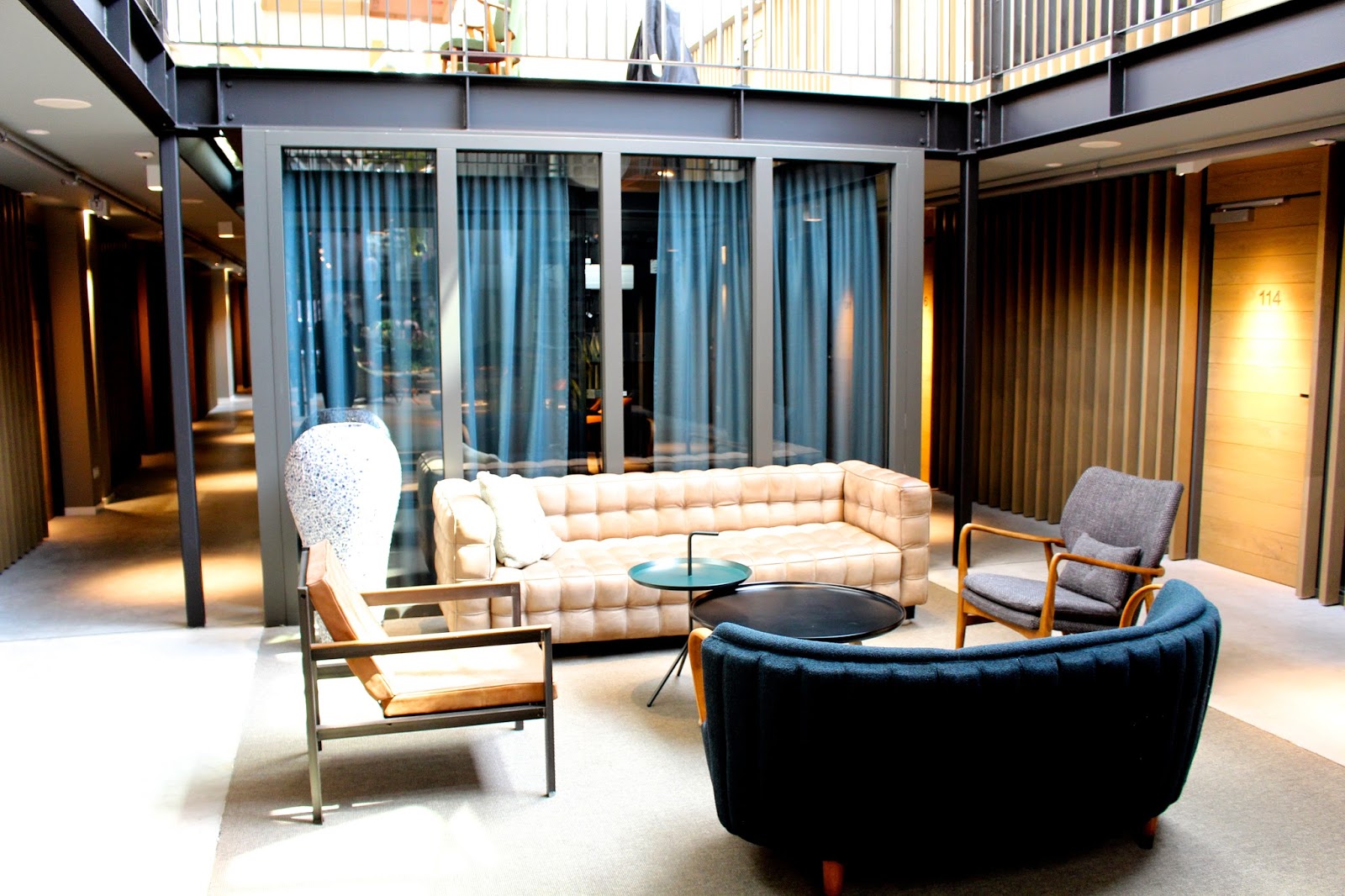 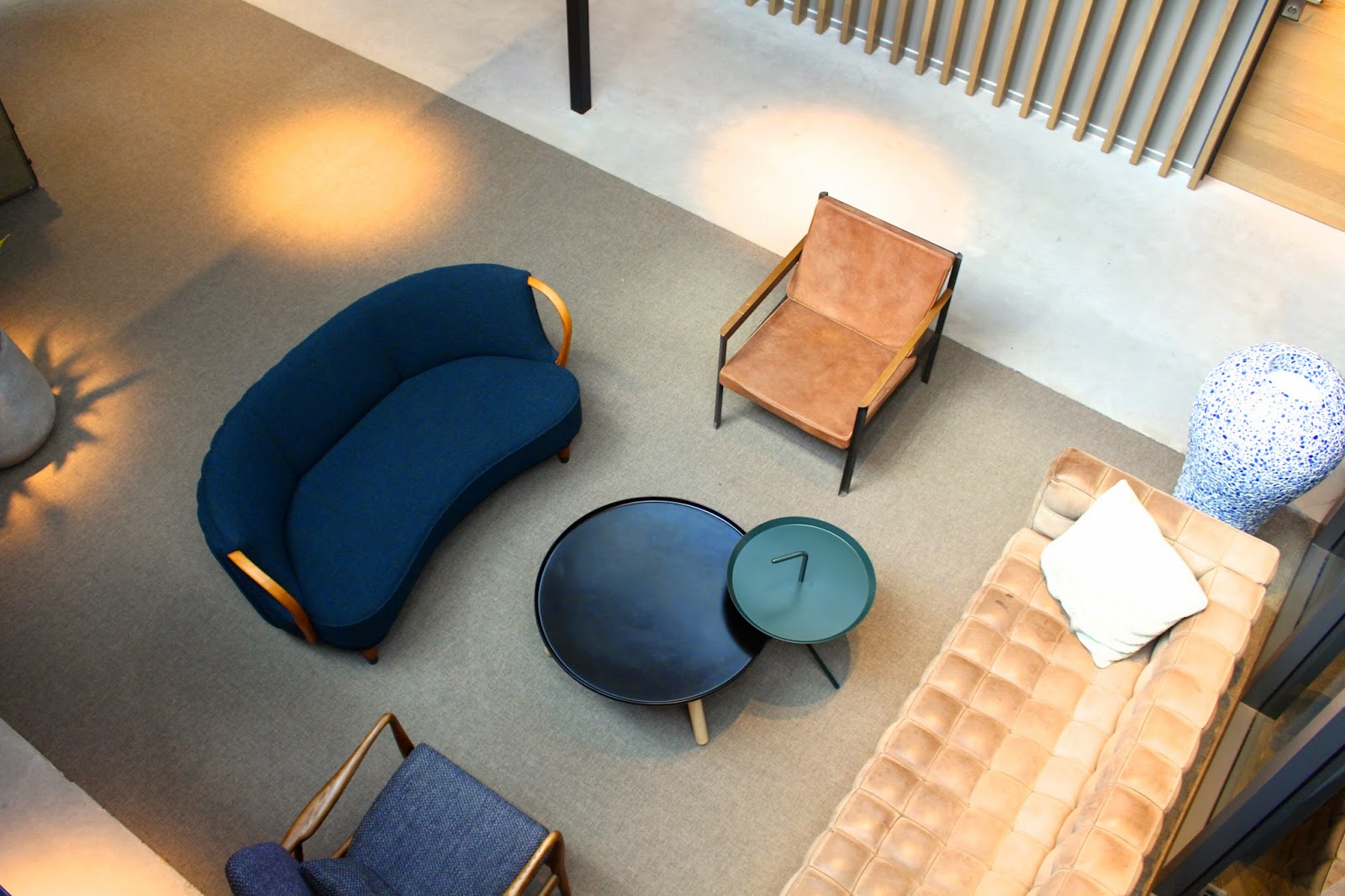 As you can see there's a really nice combination of natural and artificial lighting. 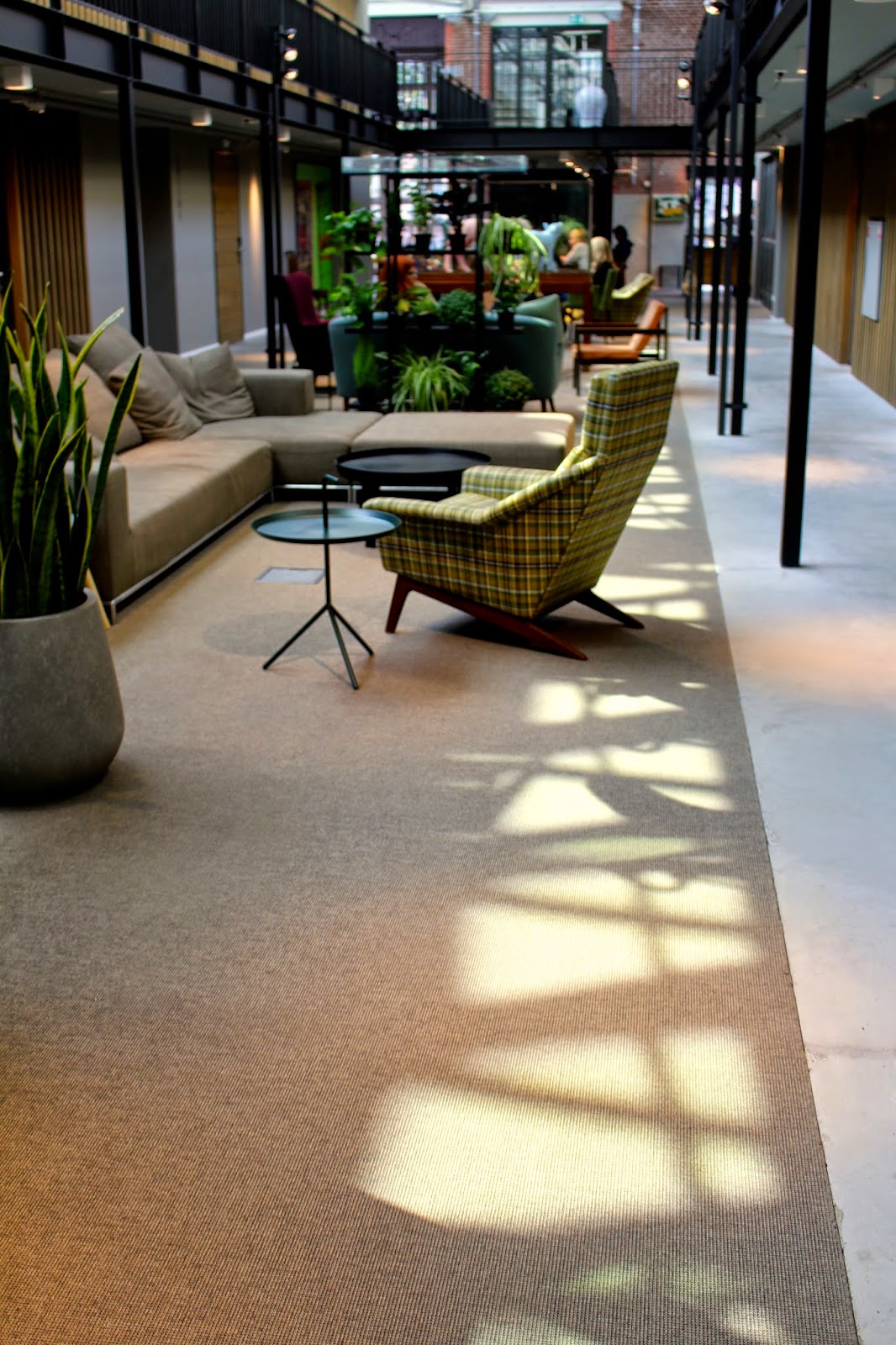 The restaurant Remise47, which is on my list to try out soon, breakfast looks GREAT! 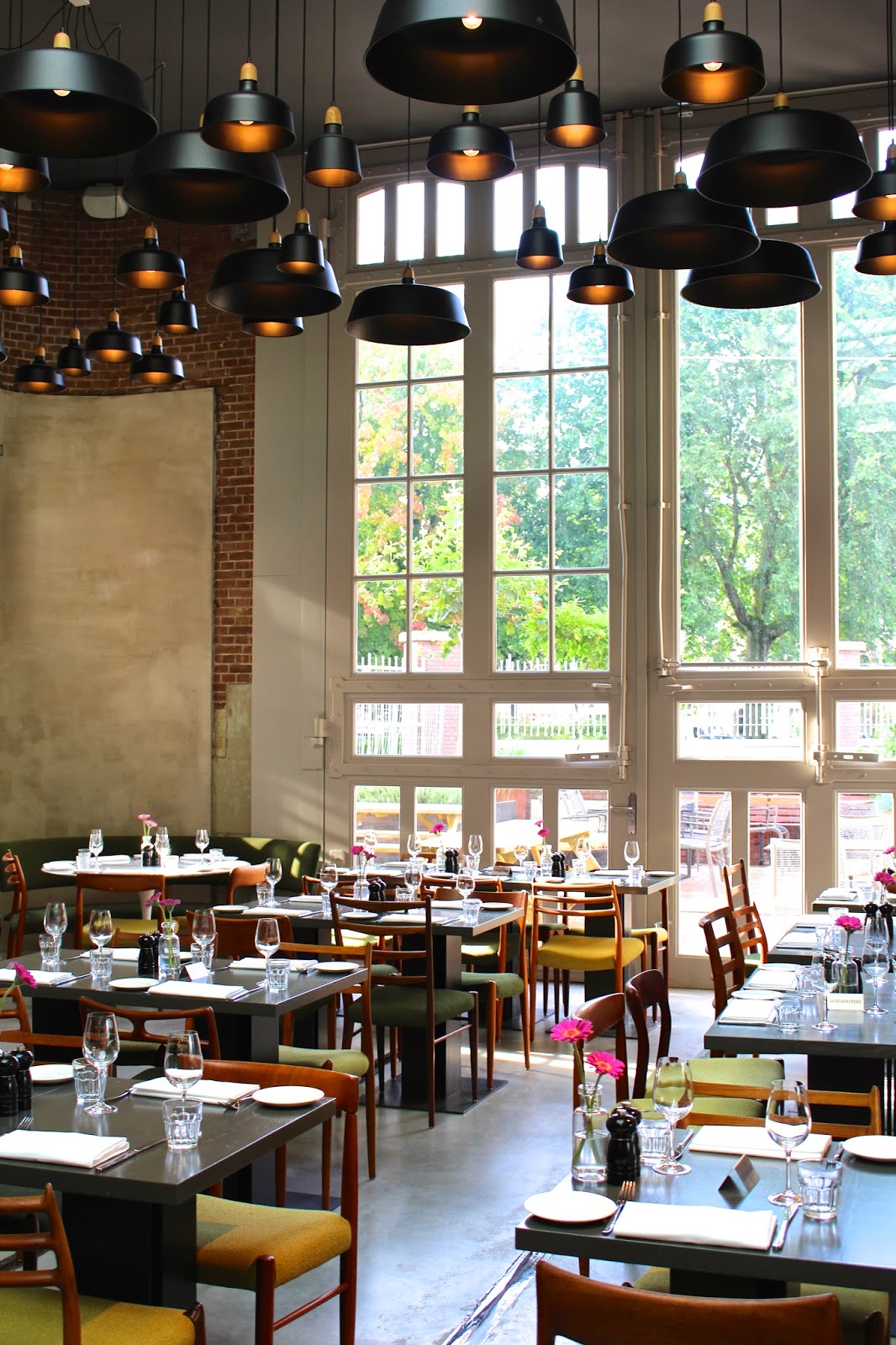 Sunny terrace in front of the hotel 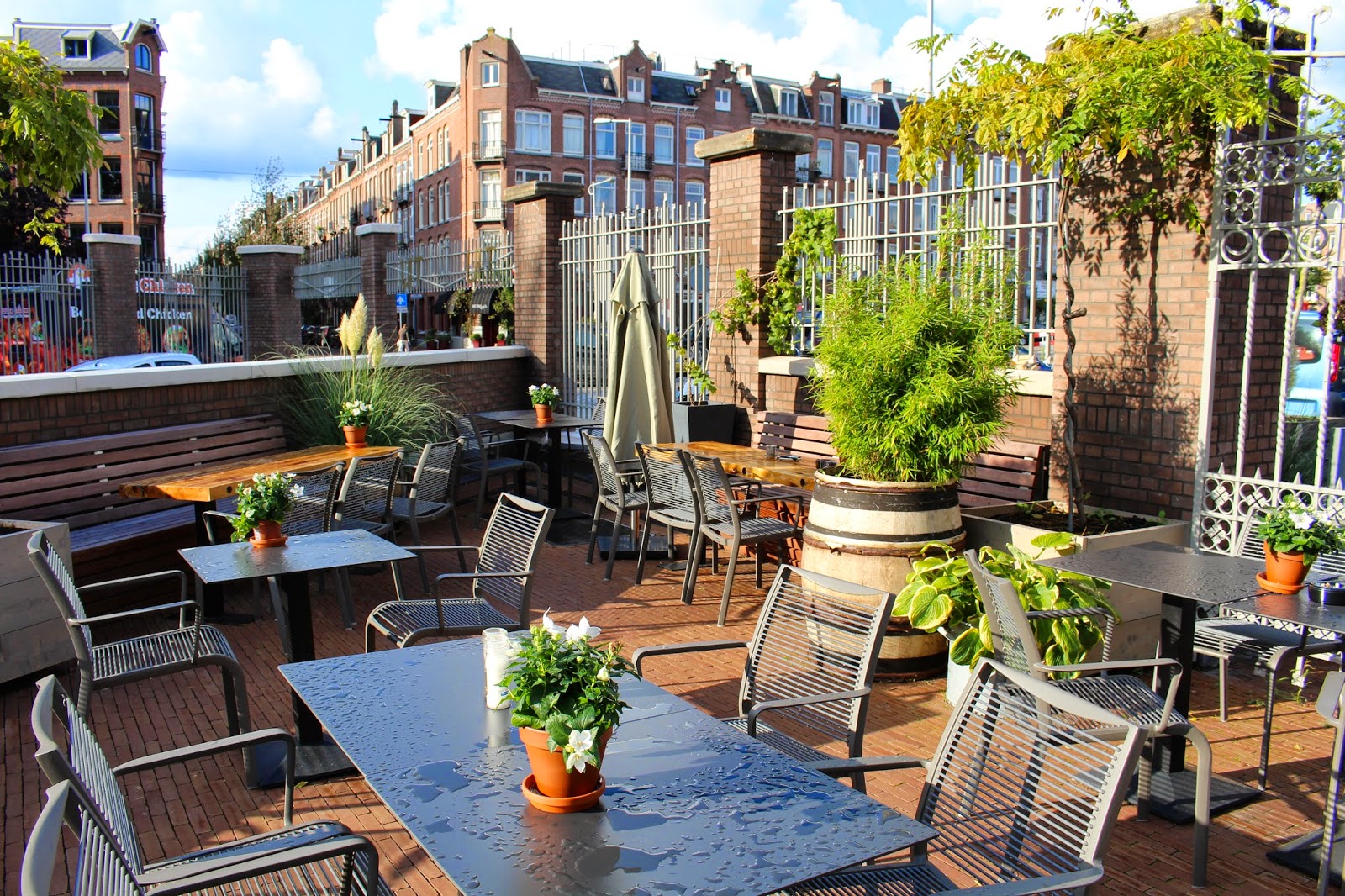 If you're thinking about going to Amsterdam for a few days, I'd definitely recommend checking out Hotel de Hallen. It's brand new, beautiful and feels like a home. It's also close to the city centre and there's an easy connection with the tram (also walking distance from the Museumplein). I usually don't write about hotels but I just had to share this one with you, hope you like it!